As new parents, we’re told not give babies cow milk before the age of one and only offer breastmilk or formula. It’s a common misconception that this is due to a potential for allergies, but in fact it is because cow and other animal milks lack the specific nutrients a baby needs. If the child has animal or plant-based milk in place of human breastmilk or formula, they can develop a nutrient deficiency.

Breastmilk has evolved over thousands of years to provide an infant with a balanced profile of the nutrients it needs. Whale milk is different from cow milk, which is different from goat milk, which is different from human milk. Each animals’s milk is specific to each infant animal’s needs and in a form that their bodies can absorb. Even if the goat or cow’s milk you find is straight from the udder, unprocessed and unpasteurized, it is still not the correct profile of nutrients for a human infant. Therefore, non-human animal milk cannot replace breastmilk until the infant is eating a substantial and varied amount of solid foods, which doesn’t occur until around their first birthday.

Luckily, modern science has been able to approximate human breastmilk nutrients in formula, and it has proven to be a perfectly sufficient replacement. There are of course differences, namely immunological components, but in terms of the nutrient profile versus another animal’s milk, formula is the far superior choice. This also applies to any plant-based milks on the market, however if you are interested in a plant-based formula, please be sure it is FDA approved as quality and formulations can vary.

Because cow milk-avoidance prior to the first year is not an issue of allergy in most babies, it is completely fine to offer them milk in the form of cheese, baked goods, etc as part of their increasingly solid diet. If you do suspect allergy, however, consult your doctor for the best way to approach this as there has been a lot of new early-years food allergy research in the past several years.

You may have heard the advice that infants under one year of age should not have honey. This has nothing to do with sugar intake, but instead we are concerned about the possible presence of spores of Clostridium botulinum, the bacteria that causes the illness botulism. These spores can become active in an infant’s digestive tract and poison them with a toxin it produces.

Clostridium botulinum produces botulism toxin, which can kill even the most healthy adult. This bacteria can be found in soils and waters all around the world and grows best in low acid, low oxygen environments, which is why improperly canned foods are the most common example of how humans may encounter the bacteria and toxin. Canned foods are usually fruits or vegetable brought in from outside, where they may become contaminated by the bacteria, then when canned improperly, the bacteria can thrive and produce the toxin. Botulism toxin is the most potent toxin that we know of, when considering the amount needed to cause death.

Clostridium botulinum can form spores, which are a type of cell that has low biological activity so that it can withstand non-ideal conditions. These spores can be found in soil, dust, and water and can be spread by things like wind. If the botulinum spore ends up in more favorable conditions it can transition to become the active bacteria again, which will produce botulism toxin.

Since honey is a natural product, it can contain Clostridium botulinum spores if they happened to have been carried into the hive somehow. The spores will not turn active in the honey and produce the toxin (unlike improperly canned goods), which is why eating honey is not an issue for adults. However, the spores CAN grow in an infant’s immature digestive tract and begin to produce the toxin. An adult’s digestive tract is not hospitable for the spores to transition, so we are only concerned about infants in this scenario.

There is nothing special about honey that makes it particularly prone to cause infant botulism. Historically however, it has been a common source of poisonings because of infant feeding or soothing customs. The main source of infant exposure to botulism spores is through soil and dust from the natural environment. This of course is unavoidable, so honey (which is avoidable) has gotten the most attention.

If your infant is exposed to honey (I’ve inadvertently given it to my infants in marinades or dressings, it happens!), there is no cause for immediate concern. Infant botulism is still exceedingly rare, but it is always helpful to be vigilant and aware of the symptoms as quick treatment will save the child’s life. Symptoms occur within a day or so (though they may take longer, even weeks, to fully actualize) and include floppiness, poor feeding, drowsiness, constipation, and a weak cry. If you notice of these symptoms even without honey exposure, especially weakness and floppiness as it is seen in around 88% of cases (citation), get medical attention immediately.

Infant botulism is definitely a scary thing, but with the knowledge of both how it occurs and what symptoms to look for, we can better protect our children.

I’ve partnered with HP to create a series of printables to help you bring some science home! First up is this amazing DNA-inspired friendship bracelet craft where you can encode a secret message right into the bracelet! I created this project at the beginning of the pandemic lockdowns, thinking that a lot of kids would be feeling isolated from their friends. I thought this would be a fun project to not only make, but then send to a friend who can then decode the bracelet and feel some love from afar.

The printable from HP includes a short lesson on DNA and how it serves as coded instructions for our cells. It also includes a full tutorial on the project, a blank bracelet code sheet, a bracelet creation sheet, and a full example to get you started. I’ve have this friendship bracelet project in my head for so long and I’m so excited that HP could help share it with such a wide audience.

Take a look at the printable here!

The only supplies you need are embroidery floss, colored pencils or crayons to match your floss, tape, and the printable!

For the most perfect black slime recipe ever, look no further! Say goodbye to grit and residue with this amazing deep dark goop!

This includes affiliate links. If you purchase from the links below, I will receive a small commission at no extra cost to you.

The glue contains a long molecule called polyvinyl alcohol (PVA). It is a polymer, which is a molecule that contains repeats of a subunit molecule (for example, “A” is a subunit and “AAAAAAAAAAAAAAA” is a polymer of A). Borax (sodium tetraborate) is a small molecule that can stick to parts of the PVA through a type of weak but plentiful bonds. One side of the borate molecule can stick to one strand of PVA, while the other side of the borate can also stick to a different strand of PVA, creating a bridge between the two PVA strands. This is called crosslinking.

Having many crosslinking sites usually makes a polymer more rigid, but the interesting thing about borate/PVA crosslinking is that the bond is transient, meaning it can easily break and reform somewhere else. This causes the slime to act kind of like a liquid and kind of like a solid. If given time, the PVA can ‘flow’ as gravity pulls and breaks and reforms the borate/PVA crosslinks. It acts like a slime instead of a true liquid because as the PVA molecules pass by more borate, they can momentarily bond to borate and another strand of PVA, slowing down the flow. If you pull the slime fast, you break those bonds at the point of stress quickly, allowing the slime to act like a solid momentarily.

This dark black slime is perfect for Halloween. Throw some googly eyes

in there for hours of fun!

This is a fun, silly, and educational activity that any kid who likes to make noise will love. Using oobleck (a mix of cornstarch and water) and common household items, you will be able to visualize the sound waves made when you yell!

What we perceive as sound is a wave of pressure transmitted through air. When you yell, your vocal chords vibrate. The energy is transmitted by air molecules smacking into each other, until they they smack into your ear. There, you have cells that can convert the vibrations into electrical signals which are transmitted to and deciphered by your brain. In this activity, you will yell into a device that will transmit your sound waves from air into oobleck so you can see the waves!

When you scream into your device, kinetic energy is being transferred from your vocal chords, through the air molecules in the tube, to the membrane, to the oobleck. Note how the oobleck is formed into different shapes depending on the pitch of your noise.

You can use this experiment to talk to your kids about eardrums (aka tympanic membrane) by comparing them to the membrane on the device. Just as the screaming-device-membrane transmits sound from air in the tube to the liquid oobleck on top, your eardrum essentially transmits sound from the air in the ear to liquid in the cochlea.

This project can also be done by wrapping a speaker in Saran Wrap, putting some oobleck on it, and playing your kids’ favorite songs. It’s a great visual introduction to rhythm, beat, and volume and will give them a whole new musical experience. 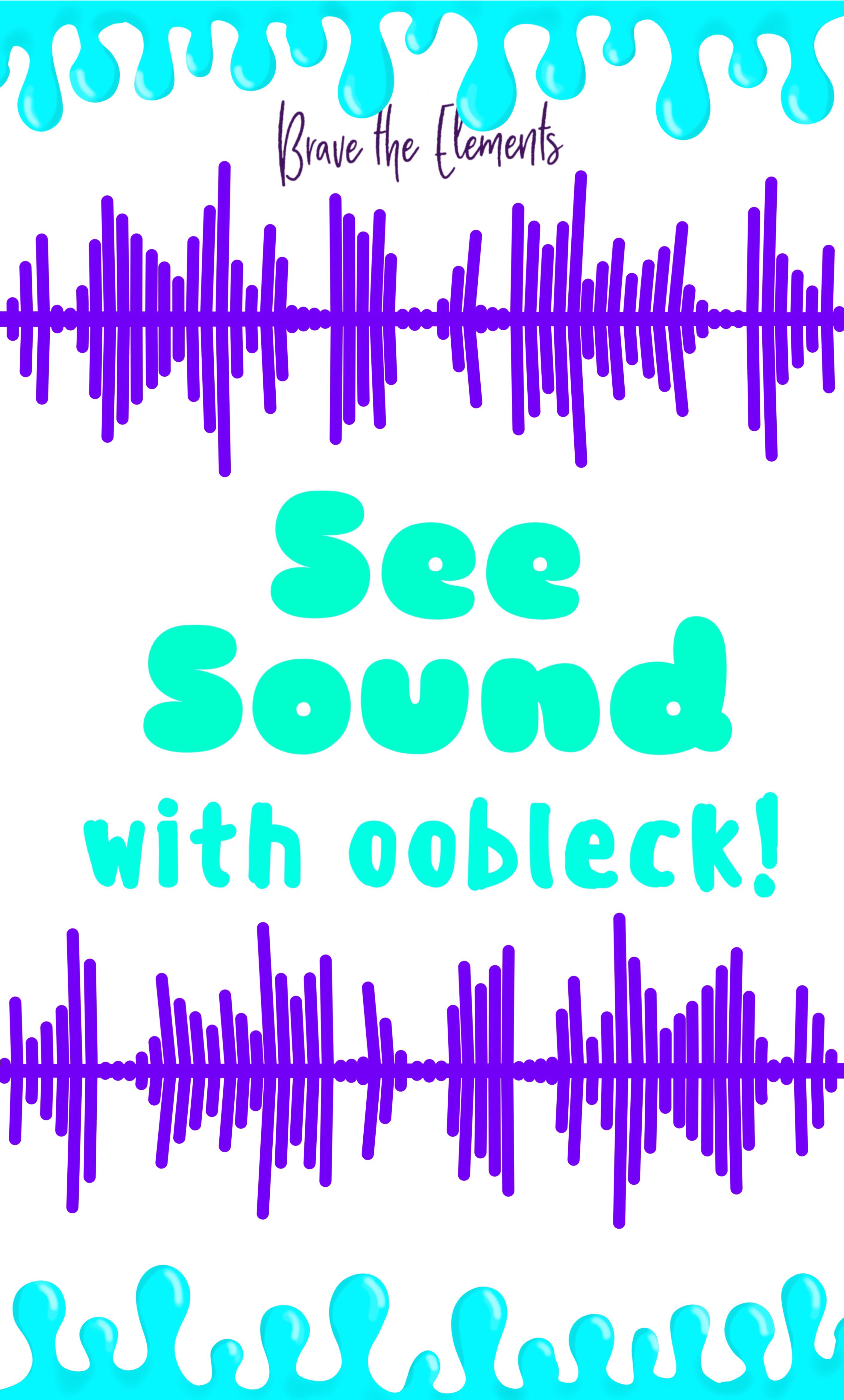